Jumptown Featured in the Boston Globe 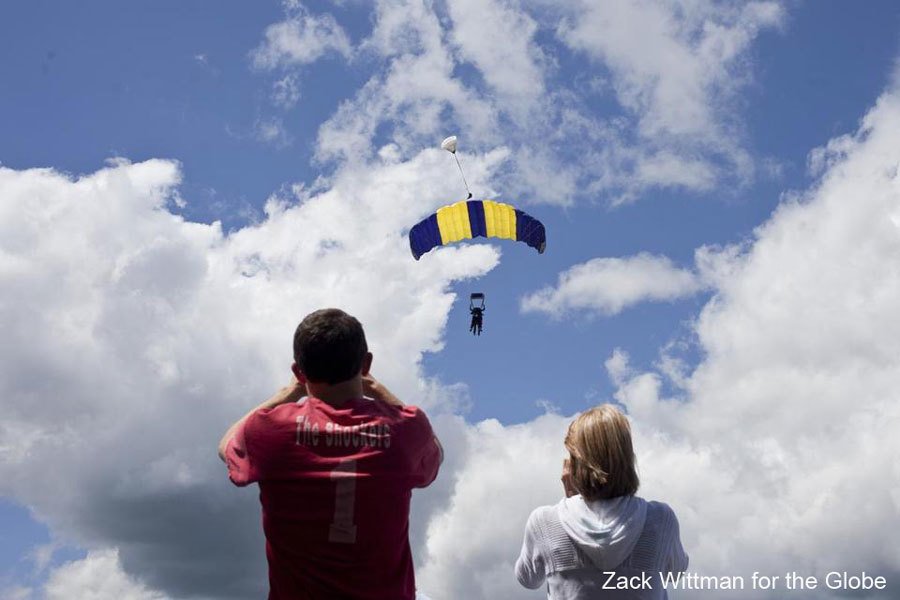 More than 9,000 feet above, a dozen tiny dots stream out of the back of an airplane. There are about 30 people milling about at the entrance to the hangar at this place they call Jumptown, and they all stop and turn their attention toward the heavens. That's not something they do often. People jump out of planes all day long here. At some point, the seemingly insane becomes mundane

But this is something of a special jump. It's the "last load," the final jump of the day, and it's a milestone for Rich Curtis, a beloved member of the skydiving club that operates Jumptown, who is making his 1,000th leap. On the ground, they're preparing the shaving cream pies that will welcome him back to earth.

From the campground next door - the 30-odd recreational vehicles and tents that serve as jump season home for many club members - the smell of the coming feast is doing its best to overpower fumes from the returning airplane. Pulled pork, ribs, and tenderloin are smoking on the grills, corn-on-the-cob and all the trimmings are being spread on a long table.

Tonight is a celebration. They will toast Curtis, a 36-year-old from Pittsfield, for his 1,000th jump. They will gather round a roaring bonfire and thank those who prepared the food. They will toast each other, this skydiving family.

And they will, silently, thank the gravity gods for another safe day in the tight and tiny world of New England skydiving.

What no one knows is that come morning, that streak will end.

Sunday morning comes slowly to the campground. The first load usually goes up by 8:30, but after the celebration, that hour comes and goes.

The sky is a patchwork of clouds - it is illegal to skydive through a cloud - and the forecast is tough to read, so many sleep in.

The tandem customers start to show up. These are the people making their first skydives.

A father arrives from Northampton with his son. A jump from a plane is his 18th birthday present. A 23-year-old woman from Northbridge, Megan Sclar, shows up alone. She couldn't convince any of her friends to come with her, so she came by herself.

Soon, the morning starts as so many have before. The plane drops its loads in the sky, and those people drift softly back to earth. Then a few words shatter the normalcy.

Whispers start circulating through the hangar.

There is no grand drama. No major announcement. Just those words, shared solemnly, person to person.

Within minutes, the details come in, well before they hit the public. It's a man they know well, a 37-year-old from Boston named Daniel Pelrine, an experienced skydiver who had done his training at Jumptown. That morning, he was skydiving at Skydive Pepperell, about an hour away, when he crashed on landing. (Authorities including the FAA and State Police continued to investigate Monday but released no details.)

Chris Milot gets the news, and he's shaken. He taught Pelrine to skydive. He'd seen him just a few weeks before.

And as sad as it is, he says, it is the reality of this sport. "We've come to terms with the fact that this could happen," said Milot, a 39-year-old with more than 7,000 jumps to his name who, in his regular job, oversees a suite of creative programming for urban youth at Emerson College.

The truth about the danger, Milot says, is that the people who get killed are rarely first-time jumpers. No, Milot said, the people who die - nationally, there were 24 last year, says the United States Parachute Association - tend to be experienced skydivers, those pushing the boundaries of the sport, who crash doing in-air formations, making risky jumps in tricky locales, trying for tricks at landing.

Milot takes a few minutes to absorb the news of Pelrine's death, then he gets ready to do what skydivers do, go into the sky and jump.

Milot tells himself what he always tells himself, what all skydivers tell themselves: On this jump, they will get to the ground safely.

That's the rationalization needed to justify chasing what Milot calls "that unspeakable attraction we have to that moment in the sky."

What possesses someone to jump out of an airplane? The answer to that depends on the person, and everyone who comes through Jumptown has their own journey. All day long newcomers go up for their first skydives, typically going tandem, which means they're strapped to an experienced instructor. While the reasons they come tend to fall in categories - birthdays, bachelor parties, a bad diagnosis, or an unexpectedly good one - there is no collective answer for what finally convinces a person to go to the door and step out.

When newcomers make it to the ground, however, there are two general reactions. "That was amazing. But I don't think I'll ever do it again." Or "Why did I wait so long to do that? When can I do it again?"

The regulars at Jumptown all fall into the latter category. Jesse O'Neil made a tandem jump on his 18th birthday, October, about two years ago. He spent all winter obsessing over it, came back as soon as he could the following spring, made another tandem jump, signed up for classes the following weekend, and has been back every weekend since. He now packs parachutes to pay for his jumps.

That's kind of the way it works at Jumptown, which is a not-for-profit collective operated by its members, the Massachusetts Sport Parachute Club, with the sole purpose of keeping the plane and the jumpers in the skies above Orange, a place which has a long history in the development of the sport. Pat Gorham, one of the earliest jumpers and instructors in Orange, is said to be the model for G.I. Joe.

The other stuff, the tandems and the "I just jumped out of a perfectly good airplane" T-shirts, and the videos of first-timers yelling "yolo" are to help keep the lights on and the plane fueled. While some club members can afford to just show up and jump a dozen times in a day - once you're licensed and have all your own gear, it's $27 per flight - many others take on odd jobs around the hangar, teach lessons, pack chutes, sleep on couches, whatever it takes to pay for their next jump. They like to joke that it's more addictive than cocaine, and more expensive.

What makes it so addictive? There are a lot of answers to this one as well, often involving statements about the "rush" and "feeling more alive." But they're usually followed by the disclaimer that it's an experience where words fail.

"Everyone has something built up in their head of what it's going to be like, and it never measures at that," said Mark Wilson, an experienced regular at Jumptown.

But the truth, they all say, is that this is not some game of cheating death.

"The only thing everyone has in common is that we're a crowd of people afraid of not living hard enough," Curtis says.

Of the pages and pages of waivers they have you sign at Jumptown, there is one that puts it bluntly. It says, simply, that skydiving is "ultra hazardous."

As Milot prepares to go up for his next jump, he has a nervous tandem client who needs some convincing: his new girlfriend, Amy McHugh.

McHugh, a 38-year-old from Weymouth, was freaked out before the whispers hit the hanger, very on the fence about jumping all weekend. But Milot assured her what he assures himself: It's going to be fine.

She finds the courage to believe him, and together they board the plane and start the 17-minute climb to 9,500 feet.

From the sky above Jumptown, there are great views of the Quabbin Reservoir, the University of Massachusetts Amherst, and Mount Monadnock. Down below, you can see the triangular airport, with Orange written in orange, waiting for you like a giant target.

It's a rowdy plane ride, lots of joking with the newcomers, people doing video interviews, asking the tandems how they're feeling. Then the door opens and it gets very real.

The door is the barrier. The door is the threshold to cross, the fear to conquer. On the other side is experience and adrenaline and euphoria. On the other side is also the potential for danger and death. Crossing it is the hardest part. About 1 in 1000 people get that far, through the safety class and the waivers and the $230 credit card swipe, and stand at the door and simply say no.

As the solo jumpers peel away from the door, disappearing into the sky, McHugh, scoots her body along a bench she's straddling, her boyfriend strapped to her back, and makes her way to the door. Once there, she has a moment where she lets the fear in. And then she's gone, into thin air, 50 seconds of freefall, then another 7 or 8 minutes under the canopy of the parachute, before her feet will touch earth again.

Minutes later, McHugh and Milot come in for a soft, gentle landing. And she's a mess of emotions.

"I don't think I can find words for it," she says. It was more floating than falling.

"I just had to completely let go, and the second I did it was clear and peaceful. I just said I'm going to let it happen."